This page contains a brief rundown on common terms in RC about RC Helis. 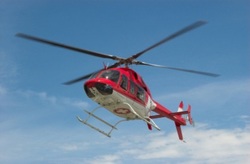 *A commercial helicopter.
Duh, this is what this site is all about. A type of aircraft that derives both lift and propulsion from one or more sets of horizontally revolving overhead rotors. Helicopters differ from airplanes in that the main blades are responsible for movement in all directions (up, down, left, right, forward, back), instead of flaps, wings, and a propeller on an airplane. As such, the only real control surface on helicopters are the rotors (main and tail).

Just to be technically correct, on larger helicopters the vertical stabilizer can be somewhat classified as a control surface because it helps the helicopter to point into the direction of flight in the same way a rudder does on an airplane.

An assembly of rotating airfoils. In other words, a hub for 2 or more rotor blades. A rotor usually has 2 blades, but can have 5 or more on larger helicopters. 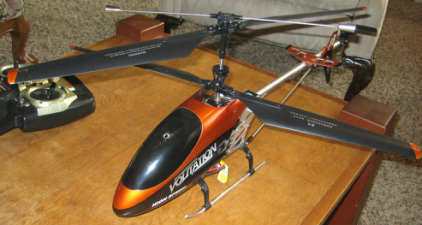 A helicopter which has two main rotors, one above the other. These two main rotors spin in opposite directions, thereby canceling each other's reactive torque (spinning effect) and making the helicopter innately stable.

Coaxials are usually 3-4 channels, but some can be only 2 (a piece of junk) or 5 (for laser tag). Generally, they incorporate a 45 Degree Flybar. RC Coaxial Helis are almost exclusively fixed pitch. 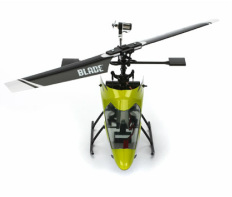 *The Blade 120 SR FP Heli
Fixed pitch (FP) helicopters, for the purposes of this site, are defined as single-rotor helicopters without the ability to change the angle of their blades to control lift. Although technically coaxials are fixed pitch as well, think of FP helis as single-rotor. They look almost identical to real and collective pitch rc helis, expect due to the inability to use collective to control height they must use throttle, like coaxials. Fixed pitch helis have a main rotor and a horizontal tail rotor which counteracts the torque (spin) of the main blades.

Fixed pitch helis are generally 4 channels, but can be 3 or 5. They usually have a 45 degree flybar.

See more about FP Helis in The Best RC Helicopter: You Choose under Skill Level / Type. 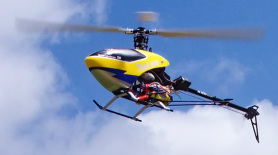 *The T-Rex 450 CP Heli
Collective pitch (CP) helicopters are any helicopter that has the ability to vary the pitch (or angle of attack) of its main blades to control the amount of lift. Like FP helis, they have a horizontal tail rotor that counteracts the spin of the main rotor. Generally, CP helis have a 90 Degree flybar, making them much less innately stable than coaxial and FP helis. CP helis always have 5 or more channels.

Because of their 90 degree flybar, they are innately unstable. However, this makes them much more responsive. To fly a CP helicopter you basically have to constantly make control corrections.

Basically, a CP helicopter has nothing to level it out, unlike FP Helis. The swashplate will always return to neutral when you let go of the sticks, but the helicopter will stay in the same attitude (roughly speaking, which way its nose is pointing) as when you let go. If the helicopter is even slightly unlevel, the rotor will be tilted slightly and thus create a small amount of lift in the horizontal direction. This will accelerate quickly to high speeds unless you correct for it, usually inducing a tilt in another direction. So unless you let go of the sticks when the helicopter is exactly level, you will always have to correct for unwanted drifts.

Sorry this is my best picture . . .
A hobby grade helicopter is one which has interchangeable parts. For example, if a motor dies, it is easily unplugged and a new one plugged in, rendering the helicopter as good as new without having to buy an entire new helicopter. This saves big money (especially when you have made a big investment). Each interchangeable part "plugs in" to the circuit board, receiver, etc. There are degrees of hobby grade.

Non-hobby grade helis are junk as soon as something breaks or wears out; if the circuit board of this kind of heli gets fried, the only thing to do is buy a new helicopter. That is why I recommend only getting a hobby grade helicopter.

If you are choosing a new helicopter, visit How Complete? to get help and advice with choosing a completion type of helicopter.

This basically means that everything - helicopter, receiver, transmitter, lipo battery(s), and sometimes transmitter batteries - are included in the helicopter purchase. RTF packs are typically the easiest way to get a new helicopter: the helicopter flies right out of the box after charging the battery(s). However, they typically are only available on beginner helis and with a controller that is not computerized. That being said, some RTF aircraft, like the Blade 450 Heli, do come rtf with a computerized radio.

BNF aircraft typically come with everything needed except the transmitter and usually the batteries and charger. However, some BNF aircraft do come with a charger and / or battery(s). The mCP X is an example of a heli that comes BNF with both.

BNF Aircraft are typically only available from Blade, but other manufacturers have Plug and Play (PNF) which is similar to BNF.