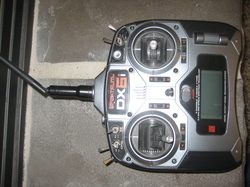 The radio, otherwise known as the transmitter or controller, is as important or more important than a helicopter. But what do you look for in a new radio, and why is a computerized radio such a good investment?

This page is all about a new R/C radio; controllers that come with most lower quality RTF aircraft are not generally going to be discussed, as usually they are very basic and not anything that you would want to buy separately, except to replace a broken or missing controller.

First off, what is a computerized radio? As can be seen from the picture of the Spektrum DX6i to the left, a computerized radio is basically a radio with a computer that allows the user to program specific values for the chosen helicopter. It needs to have a screen and at least one button (although higher end ones generally have several) for scrolling through lists and selecting. Please note, by button I do not mean switches, such as throttle hold and aux.

What can a computerized Radio do?

As mentioned above, computerized radios allow programing features for heli functions. In general, all computerized RC Heli Radios have (or should have to be worth more $$) throttle curve, pitch curve, dual rate, and exponential (EXPO) programming. Any computerized radio without one of these (except exponential, in my opinion) is not the kind of radio you want to invest in.

But what constitutes a great radio and how is it distinguished from a mediocre one? That all depends on its Brand / quality, features, and curve programming precision.

In general, this shouldn't be too hard to understand; you don't want to spend good money on a piece of junk. Therefore, don't get a radio that is rated poorly on places like Amazon or Google! The best brands that I've come across are Spektrum, JR, Hitec, Airtronics, and Futaba. Other than these listed here, I would not buy a radio from any other brand because likely it is not very good quality. The golden rule of buying a radio is, do not go with a brand you don't like! Radio brand, once selected, is the least likely aspect of your RC experience that will change.

An almost unneeded note here is do not buy an IR controller! They are junk unless you are buying a replacement for a small IR coaxial. I don't know of any computerized IR controllers, but I thought I should mention it, just in case. 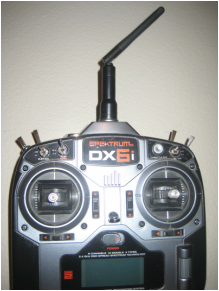 Aside from Brand / Quality, the Features of an RC Radio are the biggest selling points, as well as the biggest items to consider. The most common features are:Note: The features I think most important are bolded and underlined.

Now obviously not all of these features are needed. Many are just nice things that you can totally live without. If you are just getting a computerized radio, you can save yourself a lot of money by going for an entry-level radio without such nice extras as, say, an LCD screen or 4 pitch / throttle curves.

The final distinguishing factor between radios is how many programmable points it has in its throttle and pitch curves. This is largely channel dependent; most entry level radios have 5 points. Anything less than 5 I would recommend staying away from; it will produce a vague throttle / collective feel. With more channels, this number of points is increased to allow much smoother and more precise throttle and pitch control.

This is where you can save some money, at least when starting out: get a radio with only 5 point curves. This will cut off hundreds of dollars when getting your first CP Heli. No question, more precise curves are nice and after you have them, you'll probably think programming with only 5 points is choppy. But when forced between the choice of a larger / higher quality helicopter with an entry level radio and a smaller / lower quality helicopter with a higher end radio (a choice the majority of us do have to face), hands down I would choose the better chopper and entry level quality radio.

Forward to Range Checking
Back to Radio Rampage