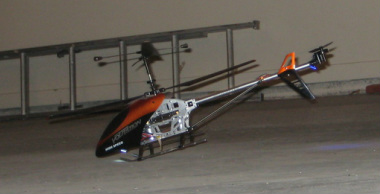 Forward flight tips the heli forward.
Note: The section below is about cyclic movement for a 3 channel coaxial. To understand how helicopters with a swashplate move, click here.

To understand this, I visualize the rotors as an airplane propeller. The propeller sends an airplane forward, but if the airplane angled steeply upwards (say, 80 degrees) the plane would only travel relatively slowly forwards. The same principle is at work on a heli rotor: because the rotors are tilted, part of the lift generated is translated into forward movement. This explains the tilted look of the heli above, which is moving forward.

How about going backwards? In this case the tail propeller is given a command to spin in the opposite direction. This reverses the direction of the tail lift, causing the tail to sink lower than the main body. You guessed it, this causes the main rotors to tilt backwards as well and creates backwards movement.

An interesting note is that the tail motor isn't the main cause of forward or backward flight; the main rotors do the majority of the work when the rotors are spinning fast enough to hover. If you would like a more in depth explanation of all the quirks of coaxial tail rotors, including tail drift and tail lift, check out Tail Rotor Rules. 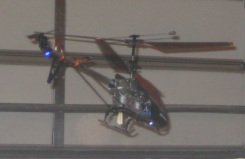 Turning is accomplished by varying the speed of each main rotor. Recall from How they Fly that by changing the speed of one or both rotors, the torques of the two rotors become unequal and the heli turns. To understand why some coaxials lose or gain height during or after a turn, check out Turning on How They Fly.

An important note is that if you're turning while moving backwards, you have to switch left and right. For example, if you want the helicopter to go diagonally backwards and right from its present position, then you would turn the heli left and then bring it backwards.

Forward To Tail Rotor Rules
Back to Coaxial Quirks