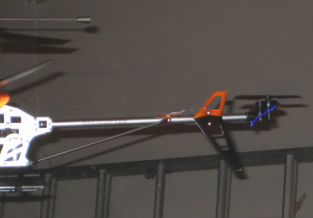 An interesting blur on my 9053 tail rotor light.
Tail rotors on coaxial helicopters have all sorts of interesting side effects. This page lists some of these interesting phenomenon. 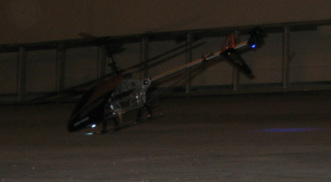 Tail lift at first seems obvious, but on closer look it is actually quite interesting. When a forward command is initiated, you'll recall from my forward flight section on Coaxial Quirks that the tail rotor creates lift on the tail, right? Well, when the main rotors are spinning fast enough to enable a hover above ground, this slight lift from the small tail rotor blade is negated by the huge drop in upward lift caused by less of the overall main rotor lift going in that direction. 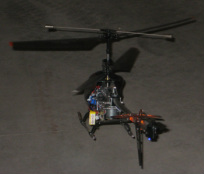 Tail drift makes sense when you realize one thing about vertical tail rotor: it is in all ways similar to the rotor blade of a single-rotor heli, RC or real. Thus, it creates a torque effect when it spins, just as a real heli's rotor blades do. However, unlike a single-rotor heli, it has no side-mounted tail rotor to correct for this (Coaxials have a different way to fix this problem; see How they fly in Coaxial Quirks). Thus, when a forwards or backwards command is given, the tail rotor will spin and create a torque effect which is not corrected for by anything except the gyro.

Depending on the gyro's sensitivity (which is determined by basically the quality of the heli), this may or may not be a problem. On my 9053, I notice a slight turn to the right when going forward, and a slight turn to the left when going backwards (because of the properties of the tail rotor in forward and backwards flight). This is easily corrected by a turning command from the controller, I just though I would mention it so that people out there (me included) would understand why their heli "doesn't fly straight."

Back to Coaxial Quirks