This page contains a brief rundown on common terms about RC Heli Flight. Included on this page are:

A structure with specially shaped curved surfaces designed to give the most favorable ratio of lift to drag in flight.

Airfoils are important, because a flat piece of wood will never create enough lift to get anything off the ground. From a practical standpoint, even a flat piece of plastic costs too much energy for the lift produced; airfoils are great at creating maximum lift on minimum power. Airfoils on planes are known as wings, and on helicopters as rotor blades or simply heli blades. I prefer rotor blades, to avoid confusion.

There are four main types of rotor blades: flat, delta airfoils, semi symmetrical airfoils, and symmetrical airfoils.
Because of their symmetrical shape, they are less efficient: with a positive increase in pitch, positive lift increases significantly but even when creating significant positive lift, they still create negative lift, although with higher pitch levels they create less opposite lift. Other types of airfoils create less or almost no negative lift.

Directions and Controls for a Heli Pilot: 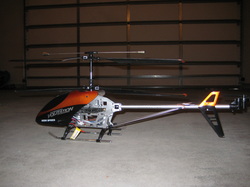 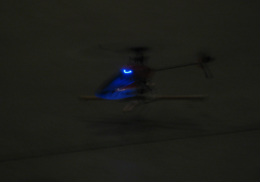 If uncorrected by another rotor, torque will cause the helicopter to spin in the opposite direction of the rotor's spin. All helicopters must have some way to correct for torque, or the helicopter would be impossible to control:
If a main motor burns or blows out on a coaxial or a tail rotor blows out on a single rotor heli, the torque of the other rotors will create a violent torque in the other direction which will send the helicopter into a violent turn which results in a crash if the throttle isn't cut soon enough. Lesson: Cut throttle immediately when a violent spin happens without cause. Its always the safest option to land, and then barely increase throttle to see what is wrong. If a motor is burned out, then the rotor it controls won't spin but the others will. If it doesn't spin, then basically the only way to fix it is to buy a new motor, unless you are a genious and know how to fix electric motors. 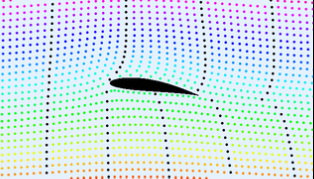 Lift is created by different airspeed above and below an airfoil.

To illustrate this, take a standard square or rectangle piece of paper with your hands holding two corners, adjacent to each other. Preferably, take the long end of the paper. For this demonstration, the part of the paper you are holding should be level, with the opposite end curving downward. Your paper, viewed from the side, is a delta airfoil (see above).

Now, blow downward and across on the paper. Almost magically, the end of the paper lifts. Why is this? Basically, the higher airspeed on top of your paper "airfoil" creates less pressure above the paper, causing the higher pressure below the paper to raise it up slightly.

As the picture above shows, the dots (representing air particles) start out even spaced, but then travel over the airfoil faster on top than on bottom. In this picture, air particles travel almost twice as fast over the top compared to the bottom.
There are two ways to increase lift: Increase the collective (or angle of attack) of the blades (which increases airspeed above and decreases it below the airfoil) or increase the motor rpm (which increases airspeed above the airfoil faster than below it). For FP Helis, the only option is to increase the throttle. With CP helis, the preferred option is to increase the collective.

My 9053 in ground effect.
This is a complicated topic, but well worth understanding. It is usually noticeable when flying less than a foot or two above the ground. More specifically, it is pronounced up until about a rotor diameter below the landing skids. It has two main side effects:
Increased sensitivity: A helicopter flying in ground effect will be more sensitive to control inputs and center of gravity imbalances. This is more pronounced on smaller helicopters.

Increased Lift: A helicopter in ground effect will get off the ground with a lower rpm / collective than it should. In other words, the helicopter will fly when the speed or collective of the rotors normally wouldn't enable it to.

As ground effect is caused by air from the rotors bouncing off of the ground, it also creates more lift. This is because the air has no place to go after being forced down by the rotors, and thus stays under the helicopter. This creates higher pressure under the helicopter -- which means denser air -- and thus not only increases the air holding the heli up, but also makes more lift per collective / rpm.

An important note is that wind can negate ground effect by "blowing" the high pressure air under the heli away. 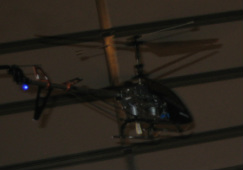 Translational lift means extra lift generated when a helicopter is in motion, in any direction. It is caused because the speed of the rotors is added to the speed of the helicopter, thus creating more lift per collective / rpm (throttle).

This means that the helicopter flies higher with a lower collective / rpm than it would hovering.

An interesting side effect is dissymmetry of lift.

This term means that depending on its place in a rotation, a blade produces more or less lift. This is true only on single rotor helis: coaxials have two counter-rotating rotors that cancel each other's dissymmetry of lift. Dissymmetry of lift can either be controlled or uncontrolled.

In controlled dissymmetry of lift, the collective of the helicopter is manipulated by the swashplate to create a maximum high and low collective 180 degrees apart in the rotational cycle. These high and lows are fixed in reference to the helicopter, not the rotors, and are based on the cyclic control commanded on the radio. This creates more lift on one side of the helicopter than another and makes the helicopter roll or pitch, depending on where the dissymmetry is. For a roll, the lift (in other words, collective) is greater on one side than the other. For a forward pitch, the lift is greater in the back than the front; for a backwards pitch, the lift is greater in the front than the back.

This is more pronounced at higher speeds (such as that of larger helicopters), when the air flowing around the helicopter becomes more significant compared to the speed of the rotors. This is also why helicopters have a maximum speed: if the dissymmetry of lift is too great, then in forward movement no roll can compensate for the enforced roll of the unequal lift. 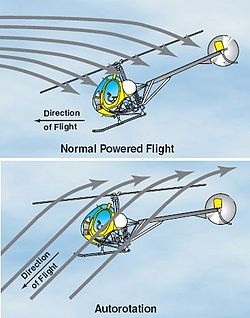 *Windflow in an autorotation*
An auto-rotation is a procedure in which the power to the main motor is shut down for an unpowered glide to the earth. In essence, the helicopter becomes a glider and can safely recover and land in an emergency. It is generally initiated in one of three conditions:
An auto rotation requires two things: a way to disconnect the rotors from the motor (so that they can spin freely) and collective pitch. It relies on the kinetic energy of the spinning main rotor to slow down the helicopter.

To initiate an auto-rotation, first the main motor of the helicopter must be shut off. Then, the pitch of the main rotors is decreased quickly to negative, usually about 4 degrees or so. For added airflow, the helicopter usually follows a glide path of about 45 degrees forward to provide translational lift. This causes the main rotor to begin to spin for the same reason a pinwheel or paper helicopter does. This spinning creates friction, which slows the descent and builds kinetic (or moving) energy in the main rotor. Then, when close enough to the ground, the collective pitch is increased to positive, generally around 15 to 20 degrees. The kinetic energy generated earlier now is dissapated by creating lift, which stops the descent for long enough for the helicopter to flare out to stop forward movement and gently land (as it is near the ground when the descent is stopped).

Back to Terms and Definitions
Forward to Radio Control