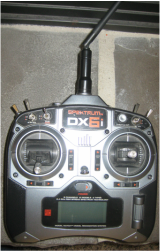 This page is all about the layout of your RC radio!

First off, I want to say that I will throw around a number of RC terms; if you do not understand them or would like to understand them better, simply click on the term and it will take you to my page on RC Terms. Or, enter Radio Control Terms now.

First off, you need to understand channels and heli pilot directions and controls.

There are two main "modes" of aircraft transmitters: Mode 1 and Mode 2. Mode 1 is common in Europe and most of the rest of the world, while Mode 2 is almost exclusively used in the United States. 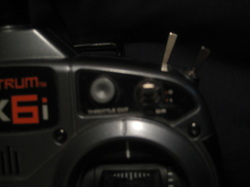 Switches on the radio can do numerous things. Typically, there is some kind of dual rates switch. On more entry level / lower quality helicopters, this is frequently a high / low switch, while on higher quality radios, there are usually 3 dual rate switches, one for elevator, aileron, and rudder. If your radio isn't computerized, these switches use the factory setting, typically 70%. If your controller is computerized, then you can change this setting for each channel, and even set one dual rate switch as the master switch (ie, switching it will turn on dual rates for each channel).

Frequently there is also a flight mode switch. This changes how the helicopter responds, typically by changing the throttle stick to a different mixing of collective and throttle. Usually this is to change from general flight mode to acrobatic flight mode. If your controller is computerized, you can change your throttle and pitch curves; otherwise, they are factory set.

Sometimes there is a trainer switch, which allows two radios to be hooked together with a cord, with one being the master controller. This is typically only used if one pilot is learning, and the other pilot is experienced. Note, both pilots control only one helicopter. The master controller can take over flying the chopper whenever needed. which is ideal if the beginner is about to crash. It also allows the experienced pilot to set up the beginner to practice a certain skill. Far more useful, in my opinion, is the ability of a trainer switch to toggle a battery timer, helping you to avoid battery overdrawing.

Another common switch is a channel 5 one, which can be used to adjust flaps on an airplane, or if programmed, to turn on lights or activate landing gear (if they are already on your chopper). The more channels the radio has, the more switches it will have, and hence the more "extras" it can control. Please note, though: the number of "extras" you can control depends on the number you have (obviously), the number of channels on your controller, AND the number of channels on your receiver. If you have a 10 channel controller but a 5 channel receiver, then the extra 5 channels on your receiver can't be used by that chopper. More channels also usually equates to finer throttle and pitch curves with more data points.
There are usually a number of other features, such as a loop to hook a neck strap to. Also, if you have a computerized radio, then there will be one or more buttons to navigate and edit computer data. On the Spektrum DX6, there is one button that can also spin to function as scrolling control. However, higher quality radios will frequently have more buttons, such as an up, down, and select button instead of the single scroller one.

I would just like to end with saying that the most important parts of your radio are the its throttle and pitch curves, timer, dual rates, and other things that are actually useful to flying. Things like the number of buttons or extra channels, even colorful displays, are nice, but never let them take front seat to the important features.

Forward to Throttle / Pitch Curves
Back to Radio Rampage