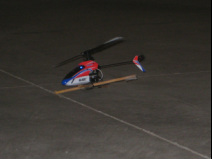 Today's lesson is all about warming up for lesson 3. You will be learning how responsive a collective pitch helicopter really is and how the controls work.

The number 1 motto is:
"Always land in one piece"

Dual Rates and Expo:
For lessons 2-6, you will want your dual rates for elevator (pitch) and aileron (roll) very low, at approximately 45%. I even reduced travel adjustment to 75% on these two channels, which made learning easier. If you don't have adjustable dual rate settings (because you have a non - computerized radio), sorry, you'll have to learn on the manufacturer's dual rate low setting, likely 70%. This will be much more difficult, but it is possible - I know a few people who have learned to fly without a computerized controller. Either way, make sure your dual rate switches for elevator and aileron are in the 0 or low setting. If your helicopter has a high pirouette (turn) rate, then feel free to engage rudder dual rate to the manufacturer's low (70%). I learned from day 1 on 100% rudder and feel it was easier then on 70%.

Expo stands for Exponential, and it is how sensitive the left and right stick are. If you haven't flown on a 3 or 4 channel RC heli before, I would keep these at the manufacturer's settings, likely 30-33%. If you have, however, this might be a little to mushy for you. Try 18-22% instead and decide if you like that better. If you want you can make these numbers higher to make the sticks less sensitive around neutral, but only if you really think so.

I should note that I learned on 30% D/R and 30% EXPO. It was great but I think it may have increased my time to learn to hover because EXPO was a little too high and D/R a little too low. I recommend lower EXPO if you can handle it.

Note: non - computerized radio users will have to skip to Range check, as their radio doesn't support changeable throttle and pitch curves.

For lessons 2-8, you will want a very mild pitch curve. This type of pitch curve will be much more forgiving when you are learning to fly. It will enable you to land quickly, but softly, if you ever get into trouble.

For general or scale type flying (which is what this flight school teaches you how to do), you will want a nice throttle curve.

I used 0% throttle at Low Stick, 40% throttle at Position 2, 65% at Mid Stick, 82.5% at Position 4, and 100% at High stick. This, however, will be subjective to your helicopter's weight to lift ratio. The important thing to do is adjust the throttle curve so that the helicopter hovers at or a little above mid stick. 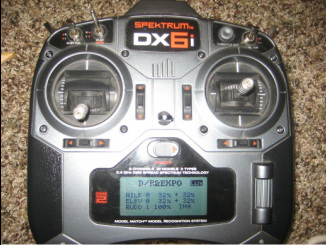 Before you ever go out to fly (every day), it is vital that you do a range check. Click here to learn how to complete one. They don't take too long, and sure save a lot of headache and pocket ache ($$$).

One more thing to mention: flying location. For today's lesson you will be on the ground, so you'll want something smooth and free of obstacles. The best surface is smooth cement, but asphalt works alright as well. A common assumption is that you want to learn on grass - NOT today! You'll be sliding across the ground the whole lesson, and grass will only tangle in your skids /training gear and cause a blade strike with the ground. For micro helis, carpet is a bad idea as well. If you want to fly inside and your heli is small enough to, then tile will work just as well.

You're not going to want to be in a busy area today. Nope, you shouldn't show off your new helicopter to your friends yet. Try and find a place with adequate lighting, but if outside, with your back to the sun. You'll also want a flat helipad, this can be anything as simple as a piece of paper. However, it needs to stay where you put it, so if it isn't heavy then tape it to the ground.

One other important thing to mention is wind. The best advice is to have as little as possible! Click here to read up about the effect of wind on your size RC Helicopter. (scroll down to where it talks about wind when learning) 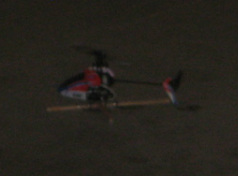 Now that we've sorted out radio settings, you've range checked, and you've found a suitable location without too much wind, its time for your first spool up!

There is one important concept that you have to understand, however, before you fly a collective pitch helicopter. They are naturally unstable. However, this is because they are highly responsive. To fly them, you basically have to continually rebalance them with your elevator and aileron.

Read up on Collective Pitch helicopters here if you don't quite understand this, and believe me, you probably don't.

Stand in position 1 and slowly increase the throttle until the helicopter starts bobbing a little on the skids. You don't want it to leave the ground, but it should be able to slide around fairly easy. Its quite natural that the heli will begin to move around. For this first part, power off, then power up again. If you find that your heli always tends to go in one direction, add some trim so that it has no apparent tendency to go in any direction. It should randomly and not consistently move away from the place it is. It is PERFECTLY NORMAL for the helicopter to not want to stay in the same spot, as long as it doesn't always go the same way.

Now that you've more or less trimmed the helicopter, you can begin ground exercises - FINALLY! Yeah, I know it took a while, but all the preliminaries to today's flying will be worth it. I promise the rest of the lessons won't have so much extras.

Real quickly, I should mention safety. For lessons 2-8: if you ever get into trouble or feel like you're loosing control, cut the throttle and take a breather. Now is a good time to get used to the location of your throttle cut switch (if you have one). This will turn off the throttle quickly if you are about to hit something or are disorientated. Practice cutting the throttle 5-10 times, each time imagining you are about to crash. If you develop the quick reflexes in a time of danger now, then you'll save yourself damage and money later on.

Haha, one more quick note: do not EVER overdischarge your battery. If the timer says battery time is done, it is. Don't hesitate to stop in the middle of the lesson, even if you haven't even learned the first paragraph, if your battery(s) are done. This lesson is not meant to be completed in one attempt. 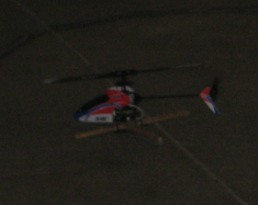 Moving forward.
Place the helicopter on the helipad in a tail-in orientation. Then power up to about 40-50%, getting the helicopter light on the skids as earlier. Now gently nudge (or bump) the forward stick until the helicopter moves forward, not too much or it will speed away from you. If it appears that the helicopter isn't moving very easily, then increase the throttle slightly. Remember, you want it to almost leave the ground, but not quite.

Recall from reading about Collective Pitch helicopters that they are all about counter correcting, so if the helicopter starts moving forward fast, then pull back on the elevator stick, until it moves slowly. You'll want to go slowly forward about 10 feet, then throttle down a bit and stop. It is very likely that to go straight, you had to use some left and / or right aileron, this is totally natural.

Now come slowly backwards about 10 feet to your helipad and throttle down. Again, you probably had to use all 4 directions on your cyclic stick to get the helicopter to move straight back. Now throttle back up and slowly move back about 10 feet again, trying as hard as you can to get the helicopter to move in a straight line. Throttle down at 10 feet back from your helipad and catch your breath, then move forward 10 feet again to end back up at your helipad.

Okay you probably found it very difficult to do these movements. Just remember, if your movements aren't very straight, that is okay. Just keep practicing until you can do these exercises well. Note, if the helicopter begins to tip too much (such as if it a leg of the training gear gets stuck in a crack) then throttle down and counter - correct until the swashplate is nearly level.

After you have gone forwards and backwards a few times go to the left slowly with a little bit of left cyclic. Be careful not to tip over too much or the heli blades will strike the ground. If you have training gear (which you DEFINATELY should) then a blade strike with the ground will be much easier to avoid. Once again, you will likely use all directions of your cyclic stick to keep the helicopter moving straight to the left slowly. Throttle down when you get about 10 feet to the left, then power back up and move slowly to the right 10 feet, back to your helipad. Throttle down when you get to the helipad.

Now throttle back up and slowly move about 10 feet to the right again, stopping and powering down once you get there. I shouldn't need to mention by now that you will probably end up using both forward and backwards as well as some left and right cyclic to get the helicopter to move straight. Now throttle back up and move back to your helipad and throttle down again.

Once you start getting more comfortable with this stop and go movement, instead do not throttle down at the end of each movement, simply stop. This will require you to use control corrections while not in motion. For example: after moving forward 10 feet from your helipad stop, but do not throttle down.

After you feel comfortable doing forwards, backwards, left, and right ground exercises without throttling down, take out the stops at the helipad. When coming towards your helipad pass over it instead and continue 10 feet away to your next stop. For example: starting from 10 feet to the right of your helipad, move 20 feet to the left and stop, passing over the helipad but not stopping there.

Keep practicing these 4 directions, always striving to get the helicopter to move straight and slowly in the direction you choose. 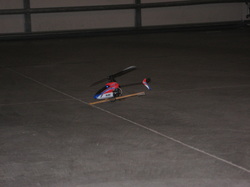 Now that you are proficient in 1 dimensional movement, it is time to introduce diagonals. With your helicopter light on the ground on the helipad again, slowly nudge the helicopter forward and to the left at the same time. This will be more difficult, especially because of the training gear, but remember to move slowly, counter correct, and slightly increase the throttle if the heli has a hard time moving.

When you have gone diagonally forward and to the right about 10 feet stop and catch your breath. Then come diagonally backwards and to the left about 10 feet and stop on the helipad. You should get it by now, but it bears repeating one more time: you will probably need to use all directions on your cyclic to get the helicopter to move straight and slowly. If you don't feel comfortable stopping without throttling down yet, keep doing it for these diagonal exercises.

When you feel comfortable with your diagonals, begin taking the stop at the helipad out and keep moving on. Keep practicing until you are comfortable, then on to Lesson 3: the hardest lesson of flight school. But don't worry, anyone can do it (even a total unnatural like me) provided they stick with it. Tomorrow may not be very fun, but mastery of it is the only way to ever be able to fly enjoyably.