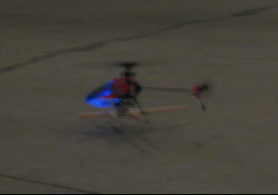 The big day: learn how to keep your helicopter in the air. After all, if we wanted to stay on the ground we'd use a car. Today you will begin to get into the air, albeit a few inches.

I'm not going to lie, today will be the hardest day of flight school. Learning to hover may well be the hardest thing you ever learn to do in your life. Don't worry - if you're patient, with enough practice, you will learn to hover.

To put this lesson into a framework of approximate length, let me tell you that it took me about 11 hours of Flight Time to learn to hover. But one mistake I made was learning to hover too close to the ground; the pictures show about 2 inches above the ground, you want to be more like 5 or 6 inches high. You will get tired of trying to hover, but if you keep up with it you will get it.

Are you ready to begin? The same radio settings you used in lesson 2 apply today, as well as the same type of location / wind and a range check before flying. Get the helicopter over your helipad in a tail-in orientation and, if you haven't flown in a few days or are feeling slightly uncomfortable, practice a few ground exercises from lesson 2 until you are ready. 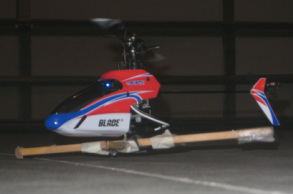 Now it is time to begin practicing hovering. This, as stated above, will be very difficult and require a large time commitment. However, this analogy helped me to stick with it:

Think of learning to fly an RC helicopter like riding a bike. When you were young, riding a bike seemed almost impossible. The movement of the front tire to keep the bike level seemed so strange and at first you couldn't respond fast enough and turn the tire to stay balanced. Eventually, however, you practiced enough to the point where you could ride a bike really without thinking about all the balancing you are doing at any given moment.

An RC Heli is the same way. At first, it will seem impossible to ever learn to hover; the helicopter will always want to run away from you and you'll feel like you have very limited control over it. Just keep practicing, and pretty soon you'll be able to hold a solid hover. By the time you're flying circuits you'll wonder why it was so hard to hover before; all the control inputs you're making every second will be second nature and you won't even have to think about them.

With the helicopter in a tail-in orientation over your helipad and you standing in position 1, slowly increase the throttle until the helicopter is barely not entirely leaving the ground, as you did yesterday. Now, increase the throttle just a bit to where the helicopter is about 4-6 inches off the ground. Depending on the size of your heli and its rotor rpm, you may or may not notice ground effect. This is natural at such a low height. If the rotor wash makes it impossible to control the heli at this height (which is true for a few micro CP helis, but not the Blade mCP X), then you may want to increase this initial height to 8 inches to a foot. But just remember, the higher you are, the farther you can fall.

As you can see, there is no such thing as "hands off" hovering with a CP helicopter. If you have flown a coaxial or FP heli, this is one thing you have to always remember. If you begin to loose control and / or the helicopter begins to stray far from the helipad, land, carry the heli back, and start over. The biggest error you can make at this stage is to keep the heli in the air if you're having trouble controlling it.

As I mentioned in lesson 2, wind will just make this more difficult, because the helicopter will keep bobbing up and down. Try not to worry about this tendency at this point; lesson 4 will teach you to correct this.

Now that you can hover at a few inches, its time to raise the height a bit, up to say 8 inches. After you hover here for a minute, increase the throttle slightly to raise it up to a foot, then 2 feet, and on up to the upper limit of ground effect on your helicopter (which varies depending on the helicopter; usually its approximately 2-4 ft above the ground). You can tell where this height is because above it, the helicopter will continue to rise. You want the helicopter to stay relatively constant at the height you are practicing at, and Ground Effect allows this. Don't worry if the helicopter bobs up and down, that will hold until lesson 4. Just know that because of constantly changing translational lift, the helicopter will never stay at the same height without throttle / collective corrections.

Congratulations! You can now hover in ground effect. All other lessons build upon this one accomplishment. Give yourself a well earned pat on the back. You did it! When you're ready, move on to lesson 4. This will be difficult too, but you've proved yourself up to the challenge.