Lesson 7: Nose in Direction of Flight

Today is all about getting your helicopter moving with the nose pointed in the direction of flight. Today will be difficult (though just about nothing compares with Lesson 3), but much less frustrating and more enjoyable because you know how to control your heli much better. Just keep with it and you will learn soon!

D/R and EXPO Settings: Begin with the same beginner-friendly D/R and EXPO from lesson 2, but as you get more comfortable with this lesson (when you get to Continuous Movement in the Direction of Flight) increase D/R up to 60%; if you want EXPO can also come up to 25%.

Throttle and Pitch Curves from Lesson 2 are still good today. In addition, you'll still want to be flying over cement, tile, or asphalt if possible; today's lesson will work over grass, but just be forewarned of the chance of getting your vertical stabilizer or skids or training gear caught in it. If you are careful you won't get caught, but you'll be safer over a smooth surface today.

Turning into the Direction of Flight 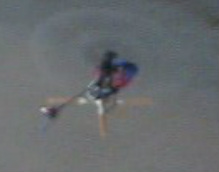 You will notice that you have to correct for the initial movement to the left as soon as you turn and instead nudge the cyclic forward. Otherwise, you will do something like a long rounded corner after passing your helipad. However, this will likely be only a tiny correction. The goal is to move in a straight line from one side of your helipad to the other.

Now come back to the right by moving towards your helipad. Once again, as soon as you get to your helipad (or actually a little before) turn to the right so that your heli faces into the direction of flight. Then continue moving forward until you have arrived 5-7 feet to the right of your helipad again. Then stop, turn 90 degrees to the left, and hover.

Note: Always turn away from you. When on the right turn to the left, and on the left turn to the right. This will prevent you from being faced with a nose in orientation (lesson 10), in which case you will probably crash.

Right Turn and Directional Movement
If this is too difficult for you, that is fine. Instead, when you are moving towards the helipad, stop there and turn to face into the direction of flight. Then continue on moving as in the above. If you do decide to start this way, practice until you feel comfortable (probably no more than 20 times) and then move on to continuous movement.

Continuous Movement in the Direction of Flight 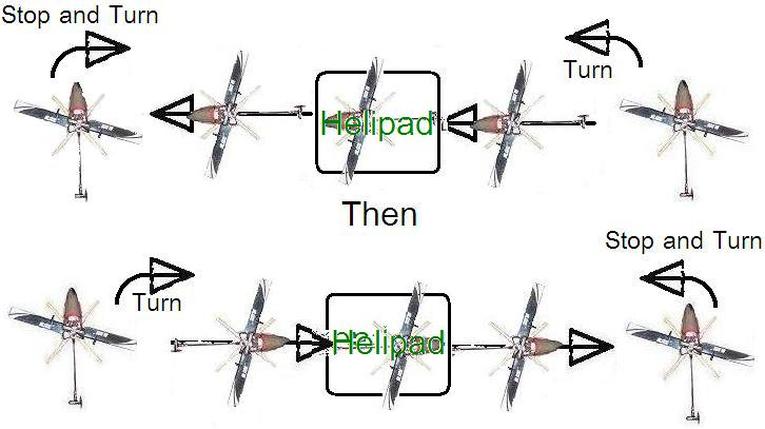 Once you feel comfortable with turning over your helipad, is time to turn from the very beginning of movement to keep your heli always pointing in the direction of flight. In more detail, you will fly to the left pointing in that direction, stop, turn 180 degrees to the right, then continue to the right. The helicopter, in essence, will always point in the direction it is moving.

You'll want to increase your D/R up to about 55-60% now, so that you have more control over your heli. EXPO can come up to 28% if you want so that you don't have to hyper control your heli. (Keep travel adjustment to 75% for elevator and aileron still, though!)
When you are 120% comfortable with this lesson, go ahead and move on to lesson 8. From now on, the risk of causing some damage to your helicopter gets greater if you make a mistake . . . take as long as you need to pass this and the next lessons.