Probably the first choice that most people think of when getting an RC heli is, "how big should I get it?" Although not the most important decision, size is a big choice.

So how do you decide? My recommendation is decide on your radio first, then subtract its cost from your total available money pool and get the largest (but quality) heli you can. Or you can decide to start with a micro heli like the mCP X, which is cheaper initially, allows you to fly inside when learning, cheaper when it breaks, flyable outside when it isn't too windy, and more crash-resistant. Its all up to you.

I classify size in 4 increments, with the rough electric size in parenthesis: Micro, Small, Medium, and Large. Following is a list of their respective pluses and minuses: 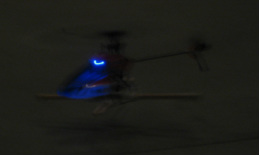 Micro RC Helicopters have a main rotor diameter of under about 15" (but probably over 7"). Collective pitch micro helis are typically flybarless to save on weight. Most FP and coaxial helis are categorized in this micro section, but a few make it into small. There are also a growing number of CP Micro helis, such as the Blade mCP X, that are full function RC Helicopters, very similar to real helicopters in all respects except power, size, and the fact that they're RC, obviously.

Benefits to micro helis are numerous:
Disadvantages, however, are significant:

In conclusion: Micro RC Helis can be a great heli for any type, beginner to advanced, coaxial to fixed pitch to collective pitch. Micro CP Helicopters in my opinion shine brightly because they allow you to complete most of flight school conveniently, and once you progress to fast circuits they survive crashes much better than larger RC Helis. However, for general flying and especially when learning they take a beating from wind.

If you are planning on a coaxial, this is the size for you. These helis don't do well outside anyways, especially if they are small. A FP heli should either be micro or small, but I would recommend micro so you can save money for a CP purchase! :)

If you want an outdoor heli, this is not the best choice for you. But if you are fine flying inside or not too far away, this type can be a great heli. My recommendation is if you already have a micro CP heli, move up to a larger size. If you have a low budget a micro heli is the perfect match for you.

I would like to mention here that I consider, from a monetary standpoint, a micro CP Heli the best investment. You don't have to pay for expensive frames, motors, or batteries, but you still can experience just about all of the flight characteristics more prevalent on larger helis. Acrobatic flight on a quality micro CP Heli is quite possible and exciting. Sure, learning to fly on a larger heli is easier, but not necessarily better. Why not explore the world of micro RC Helis! 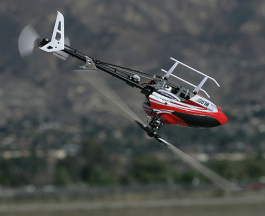 Small RC Helicopters have a main rotor diameter of 15" to about 24". They are mainly CP, but there are a few that are FP and coaxial. This is about the limit a coaxial or FP Heli can be without being very unresponsive with height control. Small RC Heli advantages are:
The disadvantages of Small RC Helis are:

In Conclusion: Small RC Helicopters are great for those who want an outdoor helicopter but can't quite afford a medium. Yes, they don't fly hardly worth mentioning on windy days, but moderate wind still allows enjoyable flight (at least on CP Helis). I would recommend this size to those who want an outdoor heli (and have an outdoor area suitable for flying this size heli, such as a park or field or larger) and don't have the resources to get a larger heli. For those with more resources or who already have a small and want another heli, try a medium rc heli. 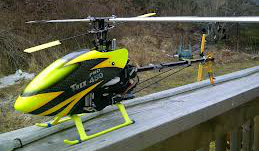 *The T Rex 450*
Medium RC Helicopters have a main rotor diameter of 24" to 30". Most people consider them the best size CP helicopter, and this is justifiably so. They can take moderate wind, don't cost all too much, and are great for beginning to extreme 3D flight. Notice I said CP helicopter, any FP or coaxial this size is probably a piece of junk. Don't throw your money away on it.

Conclusion: Many people consider this the best type of helicopter because it is best for learning and still superb for advanced 3D flight. It isn't too expensive, batteries aren't too expensive, and repairs aren't too expensive, yet it handles average wind admirably. I recommend this size or a micro heli as your fist CP Heli. If you have the resources, this heli will always be a favorite anytime, anywhere. In short, you don't outgrow a heli like this (though I don't think you'll outgrow any quality CP Heli . . .) 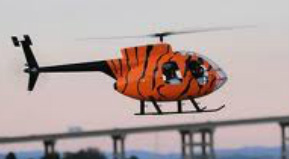 *Aerodyne 700 size scale RC Heli*
30" and up rotor diameter makes a large RC Heli in my book. Only CP Helis this size are even worth more than a glance.

Flight and Wind when Learning:

Wind is the enemy to all RC Helicopters. If you must have wind, aim for a day that is not gusty. A constant wind is better than a gusting wind. Depending on the size of your helicopter, it will be able to take more or less wind:

For micro helis (size 200 and under) you'll want a very calm day to fly (at least until you are flying circuits). Any wind over a few mph will make these helis bob up and down - not something you want when learning to fly. That is why I suggest, if you can, flying the first lessons (up to lesson 8 in CP Flight School and lesson 5 in Coax / FP Flight School, if at all possible) inside a garage or warehouse. You'll want about 20 - 30 square feet of room to do so. If you don't have this much room, you'll either have to squeeze in smaller (safely, of course) or only fly on nice, calm days. Once you have mastered hovering and basic flight, FP and CP Helis of this size can take up to about 5mph without drastic difference and up to 10mph if you really fight it (if the wind does anything more than occasionally gust this high, go inside because your flight will be pointless and you may crash). Coaxials of this size are almost exclusively indoor.

For helis from 200-300 size, you probably won't be able to fly inside, unless it is in a gym or warehouse. Both of these will be excellent locations for this size when learning, however if you can't fly inside wait for days with 4 or less mph wind with at most small gusts. Coaxials of this size will only fight the wind the whole time outside if it is more than about 3mph; at more than about 10mph it is impossible to fly. FP and CP Helis should be able to take about 7 or 8mph winds without too much difficulty.

Helis from 350-450 size can probably only be flown outside when learning, but if you have access to a large gym or warehouse with plenty of free space feel free to learn CP Flight School (yes, as mentioned above, FP or Coaxial helis this size are JUNK) lessons 2-5 inside. Try to learn to fly with under 6mph winds. These type of helis can take 10mph winds, but just the same try to fly on the calmest days possible.

Helis size 500 and up should be fine, as long as the wind isn't above about 10mph. Try learning on days with less than 8mph winds, but they can take up to about 12mph winds without too much of a problem.

Of course all these helicopters can fly in higher winds, but at the stated point flying gets more about fighting wind to maintain control and less about actually moving around. The figures above are just a guide to what wind speeds you should and shouldn't go out to fly in.

Now on to brand . . . probably the most subjective part of choosing a best helicopter.

Back to The Best RC Helicopter: You Decide
Forward to Brand