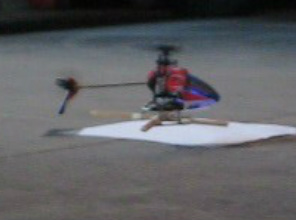 To understand this better, view the second movie under swashplate. (Note: the movie is of a 4-bladed rotor head, so the angle is 45 degrees instead of 90. But the same principle is at work: the tilted angle of the swashplate effects the pitch of the blades earlier in their rotation than where the swashplate tilt occurs.) I really don't know why this is other than it has something to do with the gyroscope effect of the spinning blades. 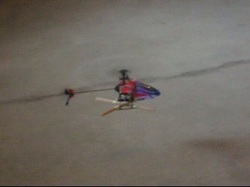 Turning is accomplished by varying the speed of an electric tail motor or the collective of a shaft / belt driven tail rotor. This creates an unequal torque effect and the helicopter turns. To turn to the right (assuming you have the most common type of heli, a counter-clockwise rotor), the helicopter increases the pitch or speed of the tail rotor, thus increasing its lift. This extra lift above that needed to cancel the main rotor torque causes the tail of the helicopter to move clockwise, initiating a right turn.

A left turn is accomplished by decreasing the rpm / collective of the tail rotor to the point where it produces less force than needed to counteract the main rotor torque. This causes the helicopter to turn counterclockwise, or to the left. 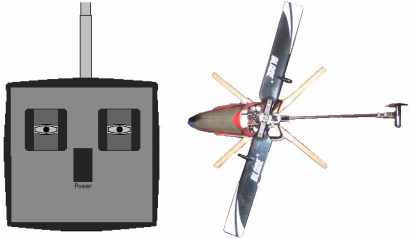 An important note is that when the nose of the helicopter is pointing towards you, the elevator and pitch control will be reversed. Also, if or when you are inverted, the controls will be reversed as well.

Forward to Collective and Lift
Back to Single Rotor Ready