Why does a Single Rotor Helicopter have a tail propeller? 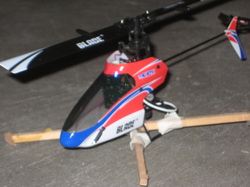 To understand why a single rotor helicopter actually has two rotors, it is necessary to first understand torque. Click on torque to read about torque in Terms and Definitions.

Basically the tail rotor is necessary to correct for torque.

Why are some Single Rotor Helis hard to fly and some much easier?

For a beginner, being able to let go of the cyclic and have the helicopter level out is very nice, but once you begin to get into FFF and especially acrobatics, a 45 Degree Flybar is extremely limiting. It is impossible to do most acrobatic maneuvers (except perhaps beginning acro) with a 45 Degree Flybar.

Another distinguishing factor in helicopter flight difficulty is flybar vs flybarless. Flybarless helicopters have more aggressively responding cyclic, meaning each command happens almost instantaneously on the helicopter. With a flybar, there is a tiny bit of lag time while the servos shift the heavy flybar, which resists any changes in its attitude. The faster response time of flybarless rotor heads not only makes them less beginner-friendly, but also increases the counter-corrections needed to fly. Click here to learn about the benefits and drawbacks of flybarless systems. Flybarless Single Rotor helicopters require more initial time to learn due to their fast response times.

Finally, the radio settings, especially the Dual Rates and EXPO can drastically affect how responsive a helicopter is. Click on Dual Rates to understand what they are, or click here to go to Collective Pitch Flight School Lesson 2, where I suggest beginner D/R.

Forward to Control and Movement
Back to Single Rotor Ready