This page contains a brief rundown on common terms in the RC Heli world. Included are: 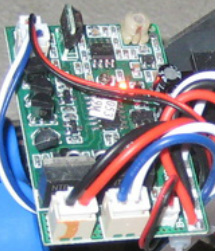 This is the part of the control board or separate part that plugs into the control board that mixes the voltage from the battery to each motor or servo. This part enables turning by slowing down and speeding up the two main rotors on coaxials. On single rotor helis, it mixes battery power between the main motor and servos. When the battery begins to loose power, at around 70-80% discharged, then this limits the amount of voltage delivered to each motor or servo to warn that the battery is low. At a certain point, the ESC will cut power to the motors entirely to save the battery from fatally overdischarging and catching on fire.

This is a bar, typically of metal or plastic, that spins with the upper rotor during helicopter flight. It acts as a pendelum to dampen any movements not called for by the pilot. As helicopters are naturally unstable, the spinning effect of the flybar acts to dampen any roll or pitch movement (not yaw) of the heli.

Eventually (when I get a camera again) I'll post a video of what a flybar does when the heli is not level - doing this made me understand its function much better.

Flybars come in two varieties: 45 degree and 90 degree.
45 Degree Flybars are self-stabilizing, meaning that if you give a forward command and then let go, it will settle back into a horizontal position. They are situated at a 45 degree angle from the main upper rotor and are typically only used on coaxials and fixed pitch single rotor helis because they make it practically impossible to do most aerobatics.
90 Degree Flybars are stabilizing, but do not pendelum the heli back into stability. Instead, they just dampen the rolls and pitch of the heli to within pilot correction. This makes constant corrections necessary to fly, but enables aerobatics without annoying flybar compensation trying to stop every maneuver. They are typically only on 5+ channel collective pitch helis because of this.

An interesting note is that real-life helicopters, before electronic stabilization, had 90 Degree flybars.

A servo is basically a motor attached to a shaft, which allows the motor to manipulate a specific moveable function. On aircraft, servos are used to control elevator, rudder, ailerons, and flaps. On helicopters, servos are used to control the swashplate, which controls pitch, roll, and collective pitch, and tail rotor pitch (if your helicopter doesn't have an electric motor, like the mCP X, but has a belt or shaft driven tail rotor). 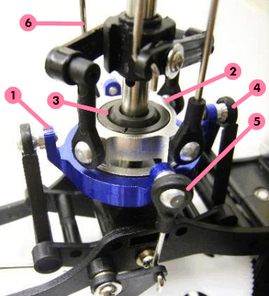 *A typical CP RC Heli swashplate.
A swashplate is a device that translates cyclic, or forwards, backwards, left, and right, commands into motion of the main rotor blades.

Basically it allows the rotating blades to be manipulated by a non-rotating system. In effect, it enables the stationary helicopter to manipulate the zipping blades.

Here's some movies of how a swashplate works:

I find the second movie, and animation, much easier to understand. It is a repeated 90-second clip showing different cyclic and pitch commands repeated from 5 different camera views. Thanks to JettaManDan09 and fozzy40sqn for these two great explanations!

The vertical stabilizer of an aircraft is the fin that corrects for unwanted yaw movement. On a helicopter, this serves as not a control surface; rather, it helps to keep the helicopter pointing in the direction of flight. On a single rotor RC helicopter, its primary purpose is to keep the tail rotor from hitting the ground when flying near the ground. It is also there for purely cosmetic purposes - to look cool.

Image coming soon!
This is also referred to as the circuit board and control board. It is the "brains" of the helicopter, the part where all the electrical signals gathered through the receiver are sorted and sent to the corresponding servo or motor. On smaller / lower quality helis, this may also include the receiver for weight or cost purposes, which in this case will also include jacks for each servo or motor to plug in.

A heading hold (HH) Gyro is a gyro connected to the tail servo (or motor for electric tails) that corrects for everything but pilot control to keep the helicopter pointed in one direction. You could think of it as if the helicopter has a GPS that always aligns it in the last commanded direction.

Heading hold gyros produce tail hold that is not affected by wind, although at wind speeds outside of its functional parameters (generally very high wind, probably 20mph +) it may not hold correctly. They are generally more expensive than Yaw Rate Gyros (see below), but are easier to learn on because tail rotor corrections are less. Only fairly recently have they been mounted on RC Helis.

Of note is that if tail rotor trim is incorrect, then the heli will slowly turn in the direction of the too high trim. This is not a defect with your HH Gyro; correct the tail rotor trim and the HH Gyro should keep the heli pointed in the correct direction.

If you are unsure of whether or not your helicopter has a HH Gyro, there is a simple test. Put out a rock or other heavy item that is close to the height of your heli's skids when hovering at about 6 inches that will not get pushed around by your heli. With training gear on, establish an approximately 6 inch hover in front of, pointing at a large, well defined object. Then move your heli sideways to the left so that the back left skid "gets caught" on the heavy object well enough so that it turns the helicopter to the left, but then slides past the object. If you have a heading hold gyro, the tail should then turn the helicopter back to point in the same direction it was before relatively quickly. If the heli continues to point in the direction it was forcefully turned, then you probably have a yaw rate gyro.

A yaw rate gyro is a gyro connected to the tail rotor servo (or motor) which dampens all turning forces acting on the tail except pilot commands. Thus, if a gust of wind blows up, the helicopter will turn to face into the wind due to the weathervane effect, but will not do so as quickly as would happen without a gyro. The YR Gyro in effect dampens outside turning forces to within pilot correction time.

YR Gyros are generally much cheaper than HH Gyros. Note that it is very difficult, even practically impossible without considerable (much longer than in flight school) investment of time to fly an RC Helicopter without either a YR or HH Gyro.

If you have a YR Gyro, you will always need to be correcting the tail hold, similar to what is necessary with aileron and elevator but generally less. The more wind, the more correction is needed with a YR Gyro.

Of note is that the weathervane effect will be much more pronounced on YR Gyro Helis. This will help the helicopter point in the direction of flight easier when traveling faster.