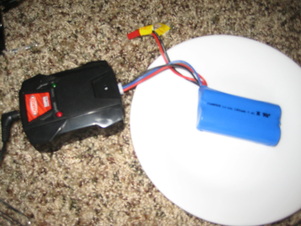 Performing a battery charge.
This page is devoted to tips, pointers, and procedures to lengthen your battery life.

Tip #1: Wait at least 15-20 minutes after you drain a battery to charge it.
This allows the battery to cool down before each charge cycle. I would make sure the battery is cool to the touch before charging it again, but 15 minutes should be alright.

Pointer #1: If the battery is hot after use, then it is a good sign that your battery is getting old.
Anything warmer than about 140 degrees is dangerous; if your battery is this warm after flying, it's time to replace it. I wouldn't use it anymore so it doesn't explode. This is a good indication that in the near future you should look to getting a new one. I would recommend a higher quality / mAh battery (keep the same voltage, though) if the battery running out is a stock battery.

Tip # 2: Wait at least 15 minutes after charging a battery to use it.
Once again, this is to let the battery's chemical processes have a break.

Pointer #2: Battery terms to understand when buying a RC battery.
mAh: Milli Ampere Hour. This is basically the electric charge transferred by a current of one milliampere for one hour. I'm no electrical genius, but the higher the mAh, the longer a battery will last per charge. This is the one part of a battery that you can change without damaging the heli.
Volt: The electrical pressure. Basically this determines how much power can flow to the motor. For lipo batteries the voltage comes in multiples of 3.7 volts, or 3.7 volts per cell.
Cell: An independent 3.7 volt battery.
If you would like a little more in-depth explanation, I found this howstuffworks article helpful.
Litium-Ion (Li-Ion): a type of battery that has a rigid cell structure and shape. It is safer than a lipo battery, but not as efficient.
Lithium-Polymer (Lipo): a type of battery with a flexible cell structure and shape. Lipos can catch fire and explode if mistreated or dropped on a hard surface. BE CAREFUL! Although more dangerous, they are more efficient than li-ion batteries and can come in practically any shape with the same cell count.
Look below to see how the li-ion (on the right) has two defined cylindrical shapes in the package, whereas the lipo to the left is just a rectangle with no visible curvature or cells.

Tip # 3: Wait until your battery has cooled down to charge it again.

Obviously, if the battery is hot it is still cooling off from flight, when the chemical components of the battery were rearranging to give off electricity. Letting the battery cool off before charging again enables this process to have a break before a new charge.

Pointer # 3: Discard (properly) batteries that have ballooned up after flight.

This is a good indication that the battery is too old to use anymore; flying with a battery that has ballooned puts you at serious risk of an explosion which could destroy your copter. Overusing an old battery in this way costs more in the long run than buying a new one. 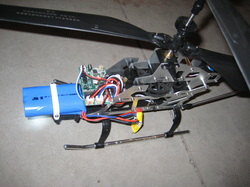 Discharging (or in other words, using in flight) the battery past a certain point can damage the battery and significantly reduce its lifespan. Never discharge past 85%.

Usually, flying with more than 85% discharged doesn't allow you to fly more than a foot off the ground. You can tell if your battery is getting low because the ESC (electronic speed controller) will be limiting the voltage to the motors. In other words, you will be flying lower with the same throttle setting. I find that at 85% discharged, at almost full throttle the heli is still about a foot above the ground.

When this happens, land, wait fifteen minutes, and charge your battery again. If you feel tempted to continue flying until the ESC automatically shuts off the heli, don't - tell yourself that you are giving up 30 seconds now for dozens or hundreds of flights in the future.

Case Example:
The average 9053 Volitation user gets 10-15 charges with the stock li-ion battery. Following these rules strictly has allowed me to fly more than 60 times off of the stock battery without a noticeable drop in performance, a 400% - 600% savings. In other words, I got the same flight time as if I bought 3-5 more stock batteries, saving approximately $30-60 dollars. For me, loosing 20 seconds each flight of pointless flying for that kind of savings is worth it :) 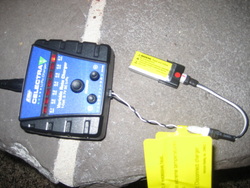 Overcharging a Lipo battery is damaging and potentially explosive to it. You don't need to worry about this with the battery and charger that come with a helicopter, but when buying a new charger or battery it is important to know.

To determine what rate would be safe to charge at:
Please note that if your charger does not have a variable rate, then you should be very careful to not charge any battery with a smaller mAh capacity than your stock battery. Usually with these type of chargers, it is okay to charge a higher mAh pack.

First off: never store an empty battery (i.e. one that has just been used and not recharged) for more than a few hours, if possible. This greatly reduces battery life and power.

Proper Storage:
When you do not use a fully charged battery for an extended length of time (even a few days), its internal resistance increases, resulting in a loss of punch and capacity. However, this becomes most significant when storing for a week or more. To prevent battery damage, when storing do not fully charge a battery. Charging it to about 80-85% is best for the battery and will result in a greatly reduced rate of aging. Also, storing batteries in the REFRIGERATOR will help to reduce the effects of storing (assuming your fridge doesn't freeze the milk all the time).

Storing for more than a few weeks fully charged can drastically reduce battery life and power, often by about 50%. Batteries stored improperly for a long time and then used tend to offer much less power and significantly reduced flight time. If you have a battery with these symptoms . . . sorry there's really nothing you can do except get a new battery and remember to store it properly next time! Just the voice of experience . . .