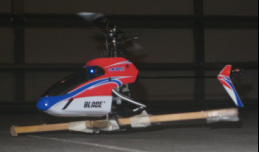 What is collective pitch, and why is it so good to have? What is a flybar, and what kind of flybar arrangement is best to have? How do you control both throttle and collective? This page answers it all!

*Relative airspeed over the top and bottom of an airfoil*
To understand the material on this page, you'll need a working definition, first, of lift.

Also important to understand is fixed pitch versus collective pitch. Click on either term to be redirected the page with its definition.

You should also understand helicopter directions in relation to flight, standard helicopter channels, and swashplate especially.

Accuracy of Collective vs Throttle Control

Collective Pitch
The biggest reason for collective pitch is that it is more responsive than throttle. Any time you change the throttle of a rotor, that means physically speeding up or slowing down that rotor. This takes time. On larger helicopters especially, this can take a significant amount of time. In fact, past a certain rotor diameter it is practically impossible to control a helicopter's altitude with just throttle.

How is a change in collective so quick to be implemented? First off, remember from reading about a swashplate that this is how collective is managed. With a swashplate, the movement of a servo is translated directly to the lower swashplate, which through a bearing is translated into the upper swashplate. The upper swashplate is connected to the rotors via a small linkage bar that, when moved, will rotate the rotor about its long axis and change the pitch. So, when the upper swash is moved via the lower swash (which is moved through the servos), the angle of the rotor blades is changed. Since rotating each rotor about its long axis requires very little force compared to rotating the rotors together around the rotor shaft (the long bar that connects the motor to the rotors), a change in collective is always much easier and therefore faster than a change in rotor rpm.

Yes, that was very technical, but what does this whole argument have to do with actually flying? Well, all helicopters by nature requires constant altitude corrections, even FP and coaxials (though not when hovering in ground effect). You need to realize that without collective pitch, wind gusts or fast flight can quickly throw your helicopter up or down before you have time to react, and possibly send your heli into the dirt. The whole point of this little (well, actually large) sub-section was to notify you that throttle control is cumbersome.

Now, a FP heli is a perfectly fine heli if it is not too large. No, it won't be able to do acrobatics, but as a beginner you generally won't have learned the skills to fly acro anyways. With a rotor diameter of less than about 15", FP helis can be great, fun helicopters.

Anyways, a big question some people have is, what flybar type should they get on their new helicopter? (Click on the term to be taken to its definition) This question has a simple answer: a 45 degree flybar for FP helis and a 90 degree flybar for CP Helis. Yes, you can get a 90 degree flybar for a FP heli but that generally defeats the purpose of getting one. It makes the FP helicopter almost as unstable as a CP Heli, but without the CP heli's responsive controls. In other words, the worst of both worlds.

Flybarless helis are setup to act like they have a 90 degree flybar.

The answer is fairly simple, however: programming. With today's technology, it's easy to program the controller (whether or not its computerized) to mix the output of throttle and collective with any input of the throttle stick. With a computerized radio, the person who programs the throttle / pitch mixing is not the producer, but the user. Don't worry, this page is not an argument for computerized radios (click the link to view it).

Throttle and pitch curves (whether factory set or user programmed) work in harmony, both in relation to the throttle stick position. In other words, they are controlled together, even though they are on different channels. This is important to understand, because if you have a 4 channel controller you won't be able to control collective.

Back to Single Rotor Ready