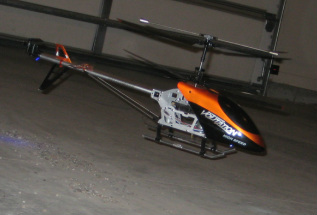 Now that you know how to control your helicopter, it is time to take to the sky.

This lesson's goal is to be able to perform basic low-level maneuvers and avoid crashing! An important note is that this lesson plan may take several days, even weeks, to accomplish. However, learning this stuff now saves you the trouble of learning later - probably after an expensive crash - that this stuff is important. The important thing to remember is that when your battery begins hitting the 85% limit (see battery tips), land, turn off the heli, wait 15 minutes, and then charge. Pushing your heli past the 85% limit kills battery life by 4 to 5 times and never really allows you to do anything else anyways.

Don't worry if you don't finish the "day's" lesson plan in a day; it takes more than a day for the average flier (me included) and lots of effort, but it's worth it.

Your helicopter should once again be in the middle of a large enough area (see Lesson 2) with you in position 1 and the heli in a tail in orientation. After passing a range check, power up the main blades until the helicopter is barely on the ground, as you did in lesson 2. If you want, practice a few ground exercises from Lesson 2.

Now, increase the throttle slightly until the helicopter actually begins to leave the ground. Don't climb above 6 inches though, to make this next portion easier as well as to avoid damage if you do happen to crash. You will notice that the heli wants to move in all directions randomly, without any command to do so. This is called Ground Effect. Depending on the size of your heli and how well you centered your heli's center of gravity in lesson 1, this effect may be more or less of an issue. Generally speaking, the more centered and heavy your heli, the less this will be noticeable.

Try to hold the heli hovering over one location as long as you can. Your will need to use your forward / backwards and left / right (if you have them) or turn controls to accomplish this. If it gets out of control, land and try again. Keep practicing this feat until you can hold a solid hover for 10 seconds, then 20 seconds, and then 30 seconds. For 3 channel coaxials, this will be very difficult, but if you make proper use of your turn controls it is very possible. Even pilots like me managed to do it as a beginner. For 4+ channel helis, this will be much easier.

Continue practicing until you can hold a hover almost indefinitely. For most people, this means about one minute. Congratulations! You just learned to hover!

Now that you have learned how to hover with the helicopter facing away from you (a tail in orientation), it is time for a little bit more difficulty. Land, then turn the helicopter around so it is facing nose in (click the link to get an idea of what you should expect when flying nose in). Slowly increase throttle until you leave the ground. Your cyclic / forwards and backwards commands will be reversed in this orientation, so be very careful to use small commands when learning to nose-in hover. Unlike on CP Helis, hovering nose in with a coaxial or FP is pretty easy. The real issue is getting used to your control reversals. If you do start getting out of control, just reduce throttle and land.

I should note that being able to nose in hover on a 4 channel coaxial or FP heli will help you quite a bit with nose in hovering on a CP Heli (Lesson 10). No, it will still be hard, but you will be used to thinking nose-in. 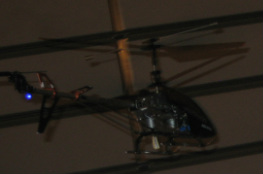 Now that you've learned hovering, begin to repeat lesson 2's exercises, this time in the air. First in a tail in orientation, go forwards about 5-10 feet, remembering to use small, gentle control inputs and correct for tail drift (on some coaxials). Afterwards go backwards about 5-10 feet (using a little bit of turning if needed).

Repeat these exercise until you feel fully comfortable with forward and backwards flight in a nose in and tail in orientation. Then, for 4+ channel helis, go sideways 5-10 feet, first to the left and then to the right. Make sure to use small commands! Of course, if you begin to lose control, cut the throttle and start again. Repeat these movements several times to be secure with them.

Now turn around to face nose in and repeat the exercises above. Remember, however, to think or all directions as relative to the helicopter. For example, a forwards command always makes the heli tilt its tail up and nose down, whether or not it moves towards you or to the left or whatever. Don't forget to chop throttle if you get out of control. This may take a while to get used to, but keep with it.

It is very important how you learn nose in (please read about control reversals while flying nose in here). Never think of flying nose in as reversing your controls! This is a very cumbersome and often ineffective way to fly and makes flying more mechanical. It requires you to memorize how to fly rather than get the "feel" of how to fly. You want to learn by thinking of all control movements on your radio as initiating movement relative to your helicopter. For example, when flying nose in, think of movement towards you and to the left as forwards and to the right for the helicopter, rather than the opposite of backwards and to the left.

This kind of thinking holds true no matter what direction you point the helicopter, unlike thinking of all movement as relative to yourself (which requires that any direction you point have its own memorized movement commands). Thinking this way also reduces pilot redundancy thinking when flying, speeding up your reaction time and thus increasing your control over your heli.

When you are comfortable with this height, increase the throttle slightly to raise your height to about 9 inches to a foot. Again, depending on your heli size, this may or may not almost entirely eliminate ground effect. Now repeat the process above, first holding a solid hover, then moving backwards, forwards, left and right. Then turn around to face nose in again and repeat the exercises.

If you have a 4 channel heli, now you want to practice diagonal exercises: move forward to the right, forward to the left, backwards to the left, and then backwards to the right. This will be a little bit more difficult, because you will have to learn by practice where to push the cyclic stick to move the heli equally forwards / backwards and to the side. When you have figured tail-in diagonals out, turn around to face nose in and practice nose in diagonals.

To keep up your motivation to practice this kind of basic flying (which most agree gets boring fairly fast), remind yourself that you're investing a little time now to help you a ton in the future, particularly in Lesson 6. If you ever want to get into FFF (Fast forward flight) or outdoor flight, then you'll want to learn nose in or you will crash. This may be caused by circuit flying or just some wind, but knowing how to fly nose in will save you big money. And all pilots agree that outdoor flight is much more fun than simple, around the house flying.

Continue raising the height (most likely over a week or more) until you feel comfortable at about 3 feet in the air. Actually, this height may vary a bit; more accurately, slowly increase the throttle until the heli no longer stops its ascent after rising a few inches. At this point, the heli will continue rising perhaps indefinitely (I have yet to test this at higher than about 60 feet, though); save throttle control corrections until lesson 5. If you do find yourself in this situation, decrease throttle slightly until the heli does not rise anymore. Be careful not to over-correct and slam on the floor, but don't hit the ceiling either! With my 9053, about 3 feet in the air is the limit for throttle-less control. 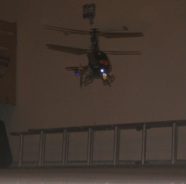 Whew! What a day! You've now learned the basics of helicopter flight control: hovering and movement. Next up is simple aerobatics in lesson 4 and height control in lesson 5. But give yourself a pat on the back: you've done it! You just passed the most critical lesson in all of flight school. Lesson 4 is challenging, but you've proved yourself up to the task.